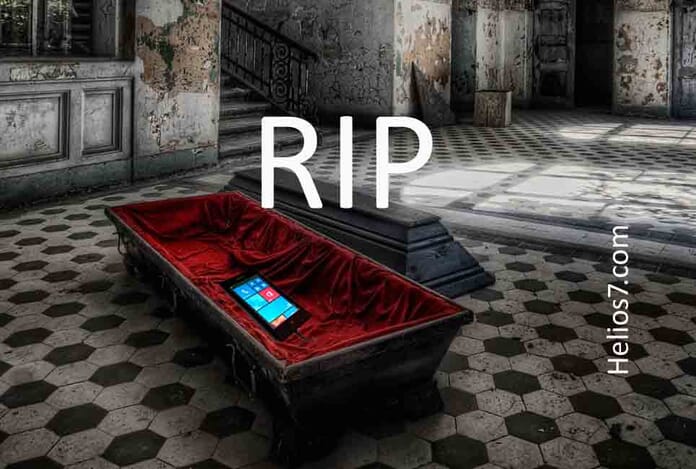 Microsoft has officially announced that it is no longer working on developing new feature or hardware for windows mobile.

Those who have purchased windows mobile will continue to receive security updates and bug fixes, but the platform is going into maintenance mode now.

This announcement arrived in a cold and accidental manner from Joe Belfiore, who is the head of the platform. He received the question right away from one of his followers on Twitter: “Is it time to leave the Windows Mobile platform?”, And the unexpected response of the head of the platform fell as a jug of cold water. “It depends on which user profile you are”, tweeted and then auctioned off: “We are not going to develop more software or hardware, it is not part of our plans.”

And the truth is that the answer should not surprise us at all: Windows Mobile was lost in usage statistics, and in the latest measurements, the operating system was barely used by 0.3% of Americans; a figure that lines the anecdote and that places the platform in a marginal niche sentenced to death.

To have a complete picture of the platform’s happening, we must travel in time to the year 2007; at that time, the mobile market was dominated with an iron hand by Nokia, BlackBerry and Microsoft struggled to capture the mobile market with the launch of Windows Mobile, its mobile version of the platform. That status quo was about to be altered forever, and nobody knew: Apple also introduced iPhone in the same year and it is seen that some did not take the newcomer very seriously.

At one point Steve Ballmer, then president of Microsoft, ridiculed the iPhone, laughing at his absence of physical keyboard and its exorbitant price. The time did not take long to put everyone in their place, but Microsoft never managed to capture the market. The giant has always been criticized for its lack of foresight before the mobile avalanche that was coming.

What makes a platform profitable?

A platform is nothing without applications. Majority of developers are dedicated to either Android or iPhone because they see more profitable to develop apps for Android or iPhone. It’s a complex balance which has to be maintained for any platform to be a hit among consumers.

The company cannot sell mobiles because there are no apps, but at the same time, there are hardly any apps available because of mobiles not popular among consumers.

What were some of the problems with Windows Phone ?

How to Remove Debt Collections From Your Credit Report

5 Android Paid Games that you can get for free today