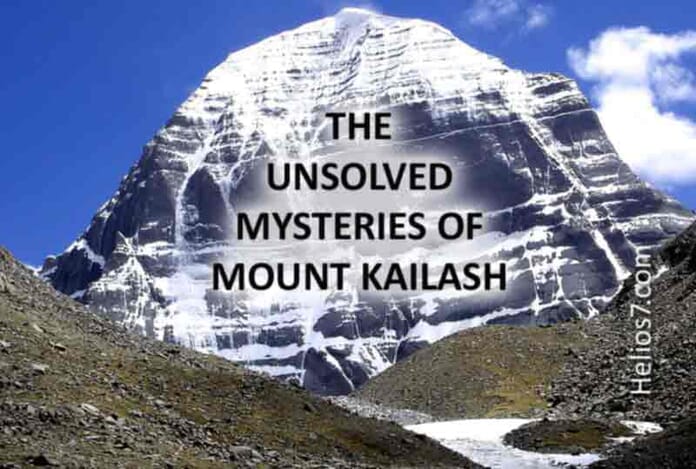 In the trans-Himalaya region, in southwestern Tibet, lies Mount Kailash, the pilgrimage center of the great religions of India. The Kailash is the mountain that is known, for its snowy peaks as halos of light, the highest spiritual attainment, the purity of the mind, and the enlightenment.

Although the climbers do not consider the Kailash a very difficult summit to conquer, there is no record that anyone has climbed to the top of the Kailash (Western mountaineers who have planned their ascent have been met with protests and animosity).

The Kailash remains pure; its true top can be achieved, according to tradition, only through meditation and the cultivation of subtle consciousness.

The word Kailash comes from a Sanskrit root meaning “crystal”; in Tibetan, it is called gangs Rinpoche (the honorary title of the great masters), which means “precious jewel of the snows.”

The Jains say that in the Kailash region their first leader was illuminated. For Buddhists, it is associated with Mount Meru, the omphalos of the universe and for the Tibetan Buddhists with the headquarters of the invisible kingdom of Shambhala, the mythical kingdom that inspired the legends of Shangri-la (and as we will see later with the original transmission of the Dzogchen or Great Perfection).

The bonpo, the members of the indigenous religion of Tibet, consider it its sacred site, home of the god Sipaimen and seat of spiritual power. In Hinduism, the Kailash is also Mount Meru or Sumeru, axis mundi and the place where Shiva resides in a state of perpetual bliss, united with his consort Parvati (also Shakti), the vibration of the creation of the cosmos (Ananda Tandava), for which the mountain represents the Sat-Chit-Ananda mantric principle. The four faces of the Kailash are associated with different precious stones (crystal, ruby, gold, lapis lazuli), composing the pillars on which the world is held.

The esoteric tradition of the Kalachakra Tantra tells that the king of Shambhala, Dawa Sangpo, approached Shakyamuni Buddha before he died, and asked him for teachings that did not require him to take monastic vows. The Buddha would have taught him the inner, outer, and secret tantras of the Kalachakra. From Dawa Sangpo would have formed a lineage of enlightened kings who united their kingdom under a single clan, the “ridgzin”. Much has been speculated about the fate of this Shambhala lineage and whether the kingdom of Shambhala exists on this plane of reality or is a Pure Land that has been generated by the accumulated merit of its dynasty of great bodhisattvas (a whole kingdom of enlightened beings). ) and in which the human being can be reborn if he reaches certain achievements in this life.

In the texts of the Kalachakra corpus it is mentioned that Shambhala lies “behind the Kailash”. This has been interpreted in different ways. Can benorth of the Kailash , inside the Kailash (also giving rise to legends like Agartha) or simply on a higher plane, perhaps in a kind of auric field, a scale beyond in consciousness. Another esoteric speculation around Shambhala mentions that the fate of this realm is to fight with a barbarous civilization that will take (or take) control of the Earth, which traverses the dark age or Kali-yuga; the prophesied triumph of the Kingdom of Shambhala would give birth to a new Golden Age. However, these legends are explained symbolically in the Sri Kalachakra, where it is commented that the great battle against the barbarian hosts occurs internally, and the barbarian armies represent the Three Poisons of the Buddhist doctrine and the four armies of Shambhala the Four Immeasurable: love, compassion, joy and equanimity. Thus the field of this battle would be the microcosm of the human body, where the triumph is sealed through the tantric practices and it manages to overcome forever the samsara or the illusion that multiplies suffering through ignorance.

In western tibet. the mt. kailash is considered a sacred place in four religions: bön, buddhism, hinduism and jainism. pilgrims walk the kora (53 km long sacred circuit, highest pass at 5.700 m) around the mountain. tibetans believe that the entire walk should be made in a single day. some pilgrims are performing body-length prostrations over the entire length of the kora. it takes them about 3-4 weeks. mt. kailash (6.638 m) has never been climbed. it is one of the last spots on earth never entered by men.

In his book Introduction to the Kalachakra Initiation , Alexander Berzin identifies Shambhala with the region surrounding Mount Kailash. Berzin points out that Shambhala in Tibetan means the place of bliss or joy, which makes it “a synonym of both Shiva god and Buddhist Heruka … Mount Kailash is not really Shambhala, it only represents Shambhala on Earth … Journey to Shambhala is not physical, it is spiritual. ” Berzin then distinguishes between the invisible or spiritual kingdom of Shambhala symbolized by the Kailash as its double and the kingdom of Shmabhala in its historical aspect that would be located in what is now northern Afghanistan, Dawa Sangpo’s place of origin.

Also in the Kailash is carried out one of the founding stories of Buddhism in Tibet. Yogi Milarepa, Marpa’s student who had to suffer all kinds of humiliations to purify his karma for committing crimes using magic in defense of his family, confronted the great Bön-po wizard, Naro Bön-Chung. In a contest that would make the victor declared to be the most powerful mahasiddha – but it symbolized the power of Buddhism vs. the power of the indigenous religion – it was agreed that the first to reach the top of the Kailash would be declared victorious. The bönpo sorcerer used a magic drum to rise to the top, but to the astonishment of those gathered there, Milarepa sat down to meditate and in complete calm managed to defeat his adversary using the sun’s rays as a vehicle.

Professor Elias Capriles, an academic scholar of Vajrayana Buddhism and a practitioner of Dzogchen, maintains in his book Buddhism and Dzogchen that Mount Kailash is the axial point from which the Dzogchen tradition was disseminated, the practice based on achieving and stabilizing the natural state of the mind that is equal to the non-conceptual, radiant and pure emptiness, the inherent nature of the Buddha.

Capriles notes that the Kailash is also the key center of the cult of Persian zurvanism, “whose cult is centered on Zurván, personification of infinite time and infinite space. Presumably, then, zurvanism is in some way related to Shivaism and Bon. And the fact that in Sanskrit ‘infinite time’ or ‘total time’ is said Mahakala, which is the name of an aspect or form of the god Shiva, seems to suggest an identity, at least partial, between Shiva and Zurván. ”

From here unfolds a fascinating hypothesis, although a little elaborate, about the Kailash as the cradle of a mode of non-dual perception, which was established between diverse religions that have in common the search to establish themselves in the natural state of consciousness, if Well by various methods.

Capriles even suggests that the transmission of the primordial state in the Kailash or its surroundings could also be the origin of Taoism, the Chinese religion that would be closely related to the bön:

In any case, it is a fact that the abode of Lord Shiva is on Mount Kailash, in Western Tibet; that said mountain constituted a privileged destination of pilgrimage for zurvanismo, and that already around the year 2000 a. C. the great master of the bön Shenrab Miwoche was teaching the dzogchén (and probably also the tantrismo) in the surroundings of the mountain in question. Although the foregoing is sufficiently suggestive, there are many other indications that the doctrines of Indian Shivaism and Persian zurvanism-and not only those, but also those of Chinese Taoism and those of other traditions associated with those mentioned above.

Since many Taoists have affirmed that their tradition and that of the bön established in Tibet are one and the same. As will be seen in a later note, not only do the doctrines of Lao-tse appear to be an attempt to express in words the inexpressible Vision (lta-ba) of the dzogchen, but the legend relates the Taoist sage directly to Tibet, as he asserts that he would have given the Te-tao Ching to an officer of the Chinotibetan frontier at the time of leaving the Chinese territory. And, in fact, there are huge coincidences between the dzogchen and the forms of Taoism that appear in Lao-tse, Chuang-tse, Lieh-tse and the masters of Huainan – which as a whole taste designate as “Taoism of inorigination” in order to oppose it to that of the ‘immortal saints’ (shen hsien) -. Specifically,

These teachings of the non-conceptual state of primordial consciousness (or cognitiveness, as Capriles translates the Tibetan term rigpa ) that were taught in their primitive form by the Buddha Shenrab Miwoche in Zhangzhung (the bönpo kingdom that would have been established in the Kailash region) ), were later refined by Garab Dorje, considered by some to be the father of the dzogchen. Write Capriles:

According to the universally accepted story, while still a child, the tönpa Garab Dorlle began to teach the dzogchén in Öddiyana, his homeland, and indicated that he was transmitting a teaching that was beyond cause and effect. Cause and effect are something that works because, being caught in samsara, we are limited by the “obstacle of knowledge”: as we saw in the first part of the book, to the extent that we value-we absolutize the thought according to which we are performing an act towards an end, this act conditions us and we create a cause that will necessarily have an effect. Now, we can also find ourselves beyond the samsaric condition and, consequently, beyond the cause-effect relationship; in fact in teaching dzogchen,

Was Anti Gravity Technology used in this Indian Temple?