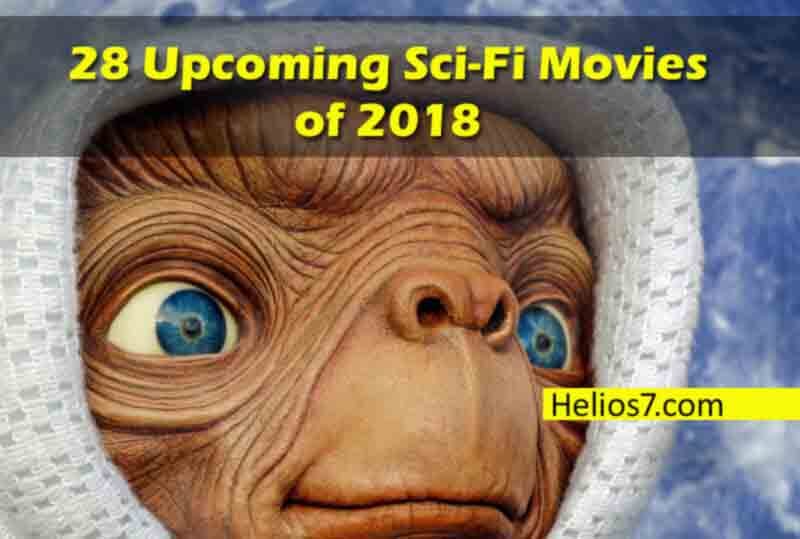 If 2017 has ended on a high note, with some amazing movies like The Last Jedi or Blade Runner 2049 in the last third of the year. There is a good news for movie lovers who are big fan of science fiction movies.

Black Panther is the latest American superhero film based on the Marvel Comics character which has the same name. Produced by Marvel Studios and will be distributed by Walt Disney Studios Motion Pictures, it will be the 18th film in the Marvel Cinematic Universe. In Black Panther, T’Challa returns his home as the king of Wakanda but finds his sovereignty challenged by a long-time adversary resulting from a conflict with global consequences.

A group of several women scientists investigates the X Zone, a mysterious place controlled by a powerful alien force of planet Earth. The X Zone is a place I have been other expeditions, but which none has returned.

After the disappearance of his scientist father, three special beings sent young Meg, his brother Charles and his friend Calvin into space to try to find him. Adaptation of the novel by Madeleine L’Engle.

This upcoming American film co-produced and directed by Steven Spielberg and is written by Zak Penn and Ernest Cline. This movie is based on Cline’s 2011 novel of the same name. This movie is set in a near future dystopian Earth, where the population, mostly spends its time in an interconnected virtual space known as OASIS. After the death of OASIS founder a race ensues between a young man and his friends who now wants to control OASIS for themselves.

The story focuses on the New Mutants, a group of mutants formed by the first graduates in the school of Charles Xavier.

Davis primatologist Okoye, a man who keeps his distance from others, has a strong link with George, the extraordinarily intelligent Silverback gorilla who has been caring for since birth. But when a genetic experiment goes wrong, this gentle ape becomes a huge and raging creature.

While the Avengers government and its allies continue to protect the world from two great threats to the quaint single hero can handle, a new danger emerges.

Prequel to the Star Wars saga in which the first steps taken by the character of Han Solo, from young to become the antihero we saw in “A New Hope”, before they meet with Luke and Obi-Wan will be known in the MOS Eisley Cantina.

Lara Croft, the independent daughter of a missing adventurer, will strive beyond their limits when they discover the location where his father disappeared without a trace.

It’s been 10 years after the first invasion suffered by humanity, but the fight is not over yet. The planet is again besieged by the Kaiju, a race of aliens colossal, emerging from an interdimensional portal with the aim of destroying the human race.

After surviving an almost fatal bovine attack, a cafeteria chef defaced, Wade Wilson, tries to fulfill his dream of becoming the most famous place waiter while trying to cope with their loss of sense of taste. In searching for the recovery of this, as well as a flux capacitor, Wade will fight ninjas, the Yakuza and a group of sexually aggressive dogs…

A volcanic eruption threatens the remaining dinosaurs in the Clouded Island, where the creatures have wandered freely for years after the disappearance of “Jurassic World” theme park.

Remake of the classic anime “Alita, Battle Angel” (1993). Tells the story of a cyborg who is rescued by a scientist in the XXVI centuries.

When a submersible break in the seabed trench Marianas, an expert diver will risk his life in trying to rescue, as I have a question: Is there still down there Megalodon, the most fearsome ocean predator that has ever existed?

In a suburb of Chicago, nearly a decade after an occupation by an alien force, Captive State explores the lives of both sides of the conflict: the collaborators and dissidents.

It concerns the education of Mowgli, raised by a pack of wolves in the jungles of India. While learning the rules, often complicated jungle. Under the tutelage of a bear named Baloo and Bagheera called a panther, Mowgli becomes accepted by jungle animals like one of them. For all but one: the fearsome tiger Shere Khan.

Sony film about the character of Venom, one of the arch enemies of Spider-Man in Marvel comics.

An adaptation of the story of Dark Phoenix, appeared in Uncanny X-Men between 1976-1977, and follows the transformation of Jean Gray.

The Nutcracker and the Four Realms (2nd November) :

The Upcoming disney movies of 2018

A sequel that will focus on how the character of Ralph leaves the arcade to start an adventure through the Internet.

Thousands of years after the destruction of civilization by a cataclysm, mankind have adapted and a new way of life has emerged. Now, the giant cities moving roam the earth mercilessly attacking smaller towns.

Arthur Curry learns that is heir to the underwater kingdom of Atlantis. That will become Aquaman, Emperor of Atlantis, pledged to defend the entire planet, both on land and in the seas.