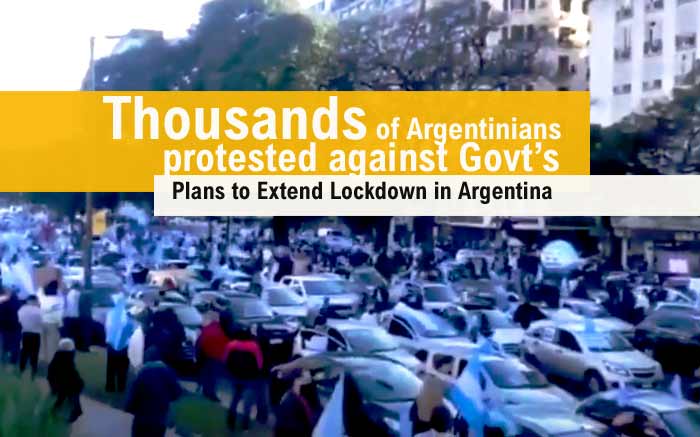 [18th August 2020,] Thousands of people in Argentina demonstrated in more than 50 cities in Argentina, including La Plata, against the Government of Alberto Fernandez plans to extend coronavirus lockdown in Argentina. They were also protesting against the judicial reform that the ruling party intends to carry out.

At the protest site, hundreds of motorists honked their car horns while holding signs that read “Enough of impunity,” “We are fed up with this dictatorship“, and few others.

The largest demonstrations occurred in Cordoba, Mendoza, Santa Fe and Tucuman. The voices against the Executive – which described the Protestants as “minorities” – even reached the doors of the presidential residence in the Buenos Aires town of Olivos, where dozens of people gathered.

The march was called by social networks on a holiday in Argentina, to commemorate the 170th anniversary of the death of General Jose de San Martin, liberator of Argentina, Chile and Peru, which is why the President held an act hours before the demonstration in which he called for “unity” in times of pandemic.

Although the main opposition coalition did not call for the demonstration, some of its leaders did so in a personal capacity, such as the president of the Republican Proposal (PRO), Patricia Bullrich, who attended the march and recorded a video that she posted on her social networks .

Bullrich, who spoke with the mask from a car, charged against the other major issue that concentrated the protesters’ claims, the judicial reform that Fernandez announced at the end of July.

“It is time for the Justice reform to be lifted, a Justice cannot be carried out to measure impunity. Finally, understand, look that there is a people demanding that there be a country with a Constitution, with Justice, “she said, addressing the President in the video.

More than 4,500 students including staff of Texas schools have tested positive for COVID-19

Delhi Schools will Remain Shut for All Students Till 5 Oct

Wearing a Used Mask could be worse than No Mask: TRT...