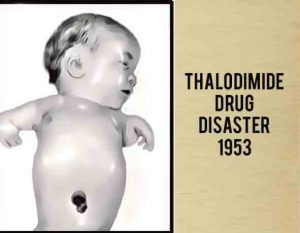 Thalidomide was first introduced in the 1950s as a wonder drug, subsequently banned for its harmful effects, and in recent years has returned to treat patients with illnesses such as cancer and Hansen’s disease. Because of the tragedy surrounding it, thalidomide tragedy marked the starting point for application of the concepts of safety and pharmacovigilance for medications. It also raised ethical debates about the pharmaceutical industry and the living conditions and rights of people with disabilities caused by the drug.

More than half a century has passed, and the children who were born with serious malformations after the medicine was taken by their mothers during their pregnancy, now almost elderly, are still a living example of the risks associated with dangers of pharma drugs.

Thalidomide was introduced in 1953 by Wilhem Kunz at Chemie Grünenthal Laboratories in Germany. In 1957, its sale was authorized for the symptomatic treatment of nausea and vomiting during pregnancy in Germany, Canada and England. Immediately after, it was exported with more than 80 trade names to 50 countries, with the exception of France and the United States, where this indication was not authorized due to the detection of peripheral neuropathy as an undesirable effect .

On November 18, 1961, Widukind Lenz , a geneticist and pediatrician from Hamburg (then the Federal Republic of Germany) highlighted increase in the number of cases of phocomelia (rare disorders in newborns) seen in the clinics in the north of the country. These children had stumps instead of limbs. A causal relationship was immediately established between the cases of phocomelia and the intake of Thalidomide by their mothers during pregnancy. It was learned that in certain situations even a single dose was sufficient to give birth to a child with very serious deformities. Just a month after the communication from Widukind Lenz, an Australian obstetrician, William McBride reported similar events in distant Australia.

The number of cases grew so fast that many countries banned the drug before the end of that year, 1961. So the number of children born with terrible deformities was around 10,000, especially in Europe, Asia, and the Middle East, where the drug it was prescribed frequently.

Year 2012: Company apologised but victims never got any compensation benefits.

On September 9, 2012, shortly after the 50th anniversary of the description of the teratogenic effect of thalidomide, Grünenthal, the pharmaceutical company that discovered and marketed it, publicly apologized for the first time for the serious malformations caused by the drug. in children whose pregnant mothers took the drug. During the event, a bronze sculpture was inaugurated in Stolberg (Germany) in commemoration of those affected represented by a girl without arms and with a malformation of the feet sitting in a chair and next to an empty one.

The words used in the speech by the CEO of the company have been considered inappropriate, insufficient and late by victims’ associations in countries such as Germany, Great Britain, Japan, Canada, Australia and Spain. All of them unanimously agree that the excuses lack sincerity, that they do not correspond to judicial responsibility, irregularities in the thalidomide commercialization process and the refusal to provide financial compensation and sufficient health