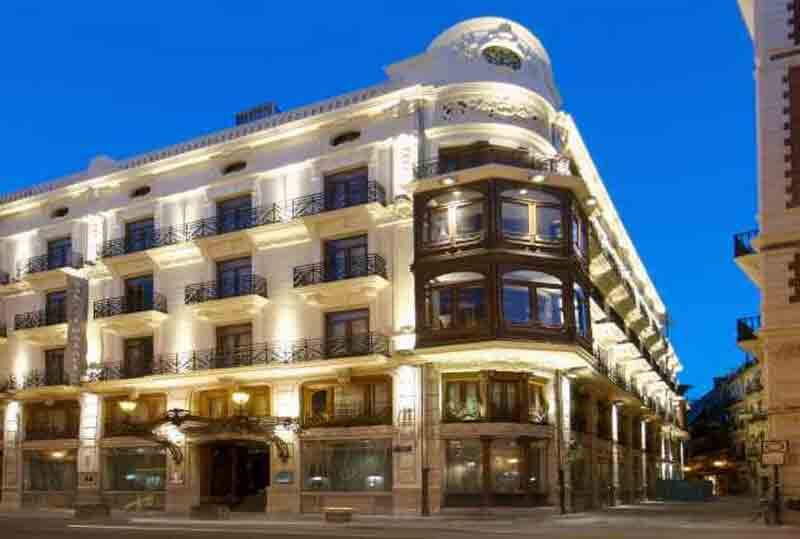 It presumes, rightly, to enjoy more than 300 days of sunshine a year. A weekend getaway to the City of Turia serves to recharge batteries, enjoy one of the best cultural offerings in Spain and, of course, the exquisite Mediterranean gastronomy that has given it fame in half the world. If you’re looking for accommodation, keep reading, because on Skyscanner we’ll show you the top 10 hotels in Valencia.

Located in the heart of the metropolis, very close to the North Station and the City of Arts and Sciences, this branch of the Marriott chain is as recommended for business and leisure travellers. Its 91 rooms, one hundred percent smoke-free, as well as other facilities, include several suites and access to the fitness room. On the rooftop terrace, you can relax with a freshly prepared cocktail after a day of work or sightseeing, as well as enjoy magnificent panoramic views.

The architect Francisco Jurado and the interior designer Francesc Rifé were in charge of rehabilitating in 2012 this palace of the XIX century to turn it into the first hotel-monument of the capital. Inside there are Gothic arches, remains of the Arab wall of the thirteenth century, the original staircase of the former Palace of the Marquis of Caro or a mosaic of the second century BC., the incomparable legacy of more than 2,000 years. Its 26 rooms, all different and decorated in wood and raw tones, make this one of the best hotels in Valencia.

Two restored palaces dating from the second half of the 19th century form the Hospes Palau de La Mar, a luxurious five-star establishment where overnight stays become an unforgettable experience for the traveller . It’s spectacular patio, like a boat deck, a garden with aromatic Mediterranean plants and the Bodyna Spa, with indoor pool-jacuzzi, Turkish bath and sauna, are the icing on the cake more than appetizing.

Although its category is three stars, the Balandret has a great reputation among hotels in Valencia. Its name honours the painting of Joaquín Sorolla, El Balandrito, which was painted on the Playa de las Arenas, in front of the establishment. Interior designer Carlos Serra was very present when it came to the decoration of its 21 rooms, some of them with terrace and sea views, as well as the common areas and the restaurant, where you can taste exquisite paellas and other typical dishes of This area of ​​the Levant.

In the Plaza del Ayuntamiento, a stone’s throw from the main tourist attractions of the villa, is the Meliá Plaza, with a hundred spacious rooms recently renovated. The four-star services include a gym, sauna and a solarium with a hot tub on the roof terrace, ideal to enjoy the many sunny days. Likewise, its restaurant, Plaza, is popular with locals for the quality of its rice, fish and seafood.

Anyone who has walked the Malvarrosa will have noticed in this imposing complex of 253 rooms with direct access to the Beach of the Sands, essential in any list of hotels in Valencia. Belongs to the select club Leading Hotels of The World and was founded in 1898 as the historic Spa Las Arenas, which still retains its architectural beauty. Scottish shower, cold pool, steam bath, ice fountain, bubble beds or pool effects are some of the experiences that can be enjoyed in your thermal hydrotherapy circuit, in addition to the indoor and outdoor jacuzzi.

Set within an impressive modernist building dating back to 1917, The Westin Valencia is one of the most luxurious hotels in Valencia. Some of the rooms have a private terrace and jacuzzi, as well as access to a spa designed to relax body and mind, either with a bathroom in its heated pool of 25 square meters or with some of the treatments offered by the Caroli Wellness Center, Such as massages or reflexology. Like other chain sites, it includes the possibility of benefiting from the Westin Well-Being Movement, which helps you feel good with healthy and nutritious recipes or allows you to rent sports equipment.

If you are a golf lover, this 18-kilometer hotel in Valencia, between the Mediterranean and the Albufera Natural Park, the Parador de El Saler is perfect for you. Its field to practice this sport, considered as one of the ten best in Spain and one of the most prestigious in the world, can be seen from many of its comfortable bedrooms. Outdoor pool to enjoy in spring and summer, another indoor heated for the more Frio Leros, in addition to a spa with Finnish and Turkish saunas, reasons more than enough to reserve a place in one of the best hotels in Valencia.

The old Meliá Palace, the first five-star hotel in Valencia, stands out for its design, as well as the care and luxurious details that have made it a reference between travellers and an emblem in Valencia. Located between the City of Arts and Sciences and the Palau de la Música, SH Valencia Palace is home to one of the best wellness centres in the town, Shalux, with more than 500 square meters dedicated to relaxation and beauty with The most modern therapies.

Recently opened in the heart of the city, a few meters from the Central Market, this Vincci hotel is one of the best value for money. Its 68 exterior rooms, four of them with lounge, have parquet floor and all the necessary amenities to rest. Its complete breakfast, in addition to a swimming pool with solarium on the roof, where the freshness is assured on the hottest days, two of the preferred characteristics of its customers.