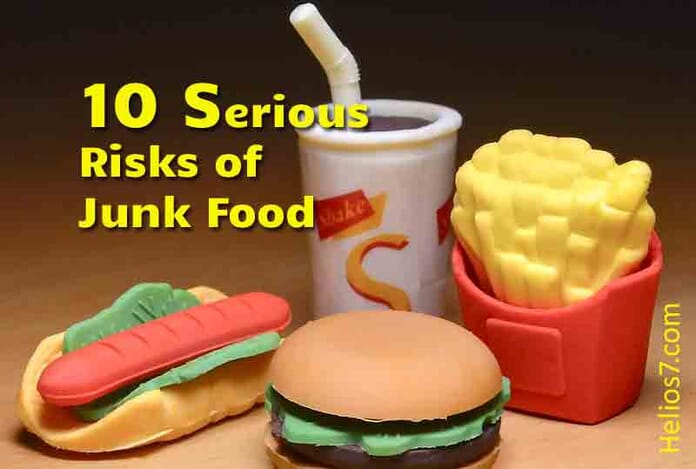 Junk is the term associated with Garbage. Despite knowing this many people throng to favorite fast food restaurants thinking that they are doing a favor to their body by ingesting food quickly and saving their precious time on earth.

We bring you 10 of them, according to various scientific studies. The junk food has very serious consequences in the organism.

Fast food is a solution for many, although its components may not be the healthiest. These foods are consumed more and more, and their consequences for the organism are serious.

What Does Junk Food Actually do to your Body ?

Following are the top 10 Risks associated with Junk Food :

1. Can generate memory and learning problems

A study published in 2011 in the American Journal of Clinical Nutrition found that healthy people who ate junk food for only five days had low scores on cognitive tests that assessed attention, speed, and mood. One of the conclusions was that eating junk food for five days on a regular basis can impair memory, which probably derives from the fact that poor and toxic diets can generate certain chemical reactions that lead to inflammation of the hippocampus, associated with memory and recognition.
Also, diets with a high content of sugars and fats can suppress the activity of a brain peptide called BDNF (brain-derived neurotrophic factor), which aids in the formation of memory and learning. The brain contains synapses responsible for learning and memory, and eating too many calories can interfere with the healthy production and functioning of the synapse.

Adolescents suffer from various hormonal changes, making them susceptible to changes in mood and behavior. Healthy diets are essential to keep hormonal changes at bay, and since junk food lacks essential nutrients, the risk of depression increases by 58% if eaten very often.

These types of foods lack essential nutrients like the proteins or vitamins that the body requires to stay healthy and functional. While you have the feeling of being full and satisfied, it does not provide you with energy, so in a short time, you feel weak and tired. If you integrate some form of junk food into all the meals of the day for a certain period, you can develop chronic fatigue, bringing your energy levels to such a low level that it can be difficult to perform the simplest tasks.

People with a junk food addiction are likely to suffer digestive problems such as reflux or irritable bowel syndrome, as these foods are fried. The oil in the food is deposited in the walls of the stomach and increases the production of acid, which irritates the stomach and aggravates reflux and digestion. Lack of fiber hinders digestion and increases the risk of hemorrhoids and constipation.

Fast food is mainly made up of saturated fats and trans fats, which directly increase triglyceride levels and “bad” (LDL) cholesterol in the blood, leading to plaque formation and cardiovascular disease. In addition, the sudden rise in blood sugar levels damages the lining of blood vessels , leading to chronic inflammation, which in turn promotes LDL adhesion to the walls of the arteries, blocking blood flow to heart. If the blockage is very large, heart attacks occur.

6. May cause kidney disease

The reason you can never refuse a plate of chips is that they contain a high level of processed fine salts that increase the salivation and secretion of enzymes that increase your craving for these foods. Elevated levels of “bad” fats and sodium salt affect the sodium-potassium balance of the body, generating hypertension. As the kidneys are responsible for filtering toxins from the blood, the intake of lots of junk food has a direct effect on their functioning.

7. It can damage your liver

Eating junk food over a period generates a harmful effect similar to the effect of alcohol on the liver. A recent study says that people who eat junk food and do not exercise have changes in liver enzymes in as little as 4 weeks . These changes are similar to those seen in those who have an alcohol abuse problem. According to various studies, the culprit of this is the high level of trans fat that fast food has.

8. Increases the risk of cancer

Lack of fiber is the main reason why eating junk food is associated with an increased risk of cancer in the digestive system. A study published in the European Journal of Cancer Prevention revealed that excessive consumption of junk food with high-fat content and sugars could increase the chances of having colorectal cancer. Also, research from the Fred Hutchinson Cancer Research Center in Seattle showed that men who ate fried foods more than two times a month were at increased risk for prostate cancer.

9. May cause type 2 diabetes

One of the factors that most contribute to the increase of the cases of diabetes are the unhealthy diets, with junk food. Healthy diets provide the body with a steady stream of glucose, which helps maintain insulin sensitivity. When we consume junk food, the stress it generates on metabolism affects the body’s ability to use insulin properly . As this type of food has no fibers, its consumption leads directly to the increase in blood sugar levels.

10. Increases the risk of dementia

This is one of the most frightening discoveries regarding the consumption of junk food. As you probably know, insulin is produced in the pancreas and helps in the transport of glucose to the rest of the body. Insulin is also produced in the brain, where it helps to carry signals between nerve cells and the formation of memories. A study by Brown University argues that excessive junk food and sweets can substantially increase insulin levels in the body, and that like type 2 diabetes, the brain stops responding to that hormone and becomes resistant to it. This can restrict our ability to reason, create memories and therefore increase the risk of dementia.

What does eating Unhealthy/Junk food do to your body ?