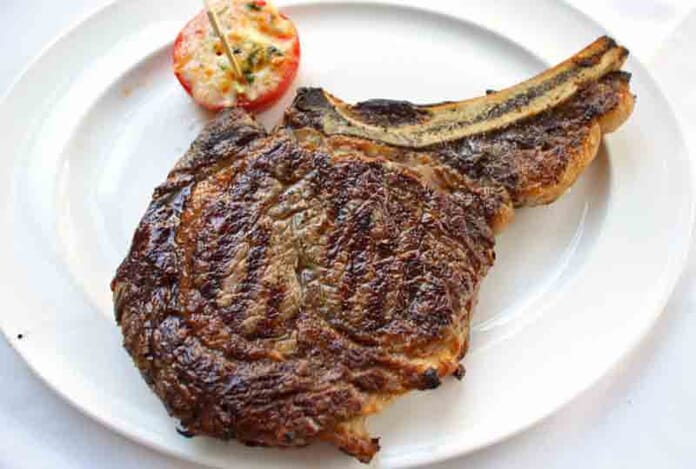 Did you know that the best meat in the world according to the New York Times is served in a small town of Leon?

Gordon looks for and breeds working oxen and then matures his meat between 60 and 150 days in cold storage … hence some talk of putrefaction. Nevertheless, the table of this underground cellar and the claim of its meat sit customers of all nationalities.

What kind of flavors does the flesh get? According to supporters (who are not few), hunting notes and nuts are uncovered. This good reputation has been gained by conquering palates but does not exempt you from complying with the regulations. The result: a fine of 15,000 euros for administrative infraction of serious nature.

Given this sanction – and considering that Spain ranks tenth in the ranking of countries with the highest per capita meat consumption – David Ruipérez and Carmen Cardoso, authors of The Happy Carnivore, revealed the guidelines to be followed for consuming red meat without in danger.

This information is relevant because of the unquestionable nutritional value of meat, according to the Spanish Society of Community Nutrition: “They are a major source of minerals. In particular, iron, zinc, magnesium, phosphorus and B vitamins. However, the connection between saturated fats in red meat and heart disease, colon cancer and liver damage underscore the importance of learning to keep it in the diet without causing havoc in our health.

It is corroborated by nutritionist Aitor Sánchez, who told BuenaVida that “we can have an omnivorous diet that is healthy or not. Eating meat is not good or bad per se. “What counts is the diet as a whole, Sánchez explains, however, that the amounts we consume are not only impacted by animal presence but also by the displacement of other products: If we eat more meat, we consistently remove other interesting foods, such as fish or vegetables. “