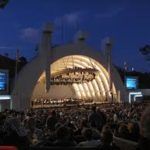 The Hollywood Bowl is a famous Amphitheatre in Hollywood , Los Angeles, California, with a capacity of 17,376 used primarily for both classical and popular sporting and musical events considered one of the iconic symbols of California and has been featured in countless movies.

This place has hosted many musical greats such as legend Louis Armstrong (Jazz) to Yo-Yo Ma (Cellist). This fantastic bowl-shaped Amphitheatre is situated within the Hollywood Hills. Behind the bowl, the Hollywood Hills rise significantly, and the iconic Hollywood sign is clearly visible to the northeast. The venue is dedicated to music and was rated as one of the 10 best live music venues in America by Rolling Stone in 2018. Hollywood Bowl is publicly considered a major stop on domestic and international music tours.

What is the Hollywood Bowl’s seating capacity?

The Hollywood Bowl seats approximately 17,500 people. The seating arrangement is that of a typical amphitheatre, although with a more elliptical, or elongated, shape. The seating row height rises gradually toward the back, just like an indoor theatre. Each and every section benefits from the aural boost of electronic amplification and a clear view of the stage.

Can you use public transportation to reach this place?

Absolutely yes, Hollywood Bowl is accessible through public transportation. The Metro runs a Red Line that travels to the Highland/Hollywood stop. The Hollywood Bowl shuttle bus which is awaiting at Orange Drive, shuttle sightseeing people with Hollywood Bowl tickets to and from the venue during hours of operation.

Is there any facility of wheelchairs available at the Hollywood Bowl Campus?

Yes, the environment at Hollywood Bowl campus is surely wheelchair friendly. You can quickly drive to the wheelchair-friendly Bowl shuttle lots, park absolutely free and can catch the shuttle to Hollywood Bowl events. For any provided Hollywood Bowl event, you will find up to 200 wheelchairs, semi-ambulatory and companion Hollywood Bowl tickets available. There are also clear sign language interpreters, open captioning, assisted listening devices and accessible restrooms for those with special needs.

Is outside food permitted?

Yes, outside food is permitted and encouraged. You can bring containers, picnic baskets and small coolers measuring no more than 15 inches high by 15 inches wide by 22 inches long. Bottles of wine and beer as well as any food you like are acceptable.

Can I bring the kids?