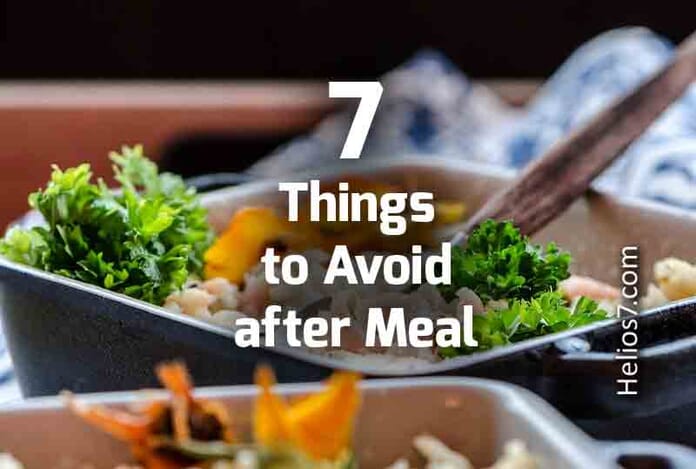 People prefer to lie down or sit comfortably in a chair after having dinner but this is a big health mistake which you should never make according to experts. These habits are detrimental to your health and can put your health at risk.

7 things to Avoid after having a meal

1. Smoking – Smoking is generally bad, however after a meal, it’s 10 times the killer; YES that’s smoking right after a meal is extremely bad idea and if you must do it you should wait at least a couple of hours after the meal. Cigarette contains chemical known as nicotine which binds to oxygen your body desperately needs for digestion which makes your body absorb carcinogens according to several studies smoking a cigarette after a meal produce same effect as smoking 10 cigarettes at once and increases your risk of bowel and lung cancer significantly as well.

2. Lying Down for a Nap – You should avoid going to bed after a meal lying down for a nap or sleeping right after a meal which is the favorite relaxation technique of millions of people but this habit is unhealthy.

When you lie down, some of the digestive juices from your stomach flow back to the esophagus because of gravitational force and also due to its acidic nature. It can easily burn the inner layer of the esophagus causing acid reflux. You could wake up feeling heaviness in chest or burning sensation in the chest.

3. Taking Shower – Avoid rushing to shower after a meal and one must wait 30 minutes after eating a meal. Digestion process needs a lot of energy and blood flow to our body but when we take a shower/warm water shower blood flows towards your skin to release off the heat thus making it difficult to digest.

4) Drinking Tea – Drinking tea is healthy but you should avoid consuming tea right after a meal. Drinking tea right after having a meal will interfere with the iron absorption in your body as tea contains tannic acid which binds to the iron and protein from our food. It will result in 87 percent decrease in iron absorption and even iron deficiency which can further lead to anemia dizziness we nice and fatigued.

5) Eating Fruits – Eat your fruits and vegetables before not after a heavy meal. Fruits are recommended by almost everyone be it some expert or dietician. However, consuming fruits just after any meal can be harmful because fruits are the easier to digest and just take 20 minutes to travel from your stomach to intestines where they are finally digested.  Bananas and dates being the two exceptions which are quickly digested. Therefore, when you eat a fruit after a meal it gets stuck with the food thus not traveling in time to the intestines and getting spoiled as a result. You are mixing two separate foods which have different digestion time. It is best to avoid fruit after meal.

6. Drinking Cold Water – You must avoid drinking cold water right after a meal. The reason is very simple ice water does not let the food digest properly because it causes clumping of food. On the other hand hot warm water helps absorb nutrients better.

7. Exercising – You should wait for at least 1-2 Hours to let your body digest food. If you hit gym immediately after having a meal, you will end up delaying your digestion process which will put unnecessary strain on your body. You can go for a brisk walk, but doing jogging, hitting the gym or any other heavy workout will put a lot of stress on your body. Smart Bracelets and Apps with Sensors have little effect on health

Obesity of children and adolescents multiplied by 10 in the last...

Drinking Coffee in California may soon come with a Cancer Warning

Carbon Monoxide poisoning and other 4 Health Dangers of major hurricanes...