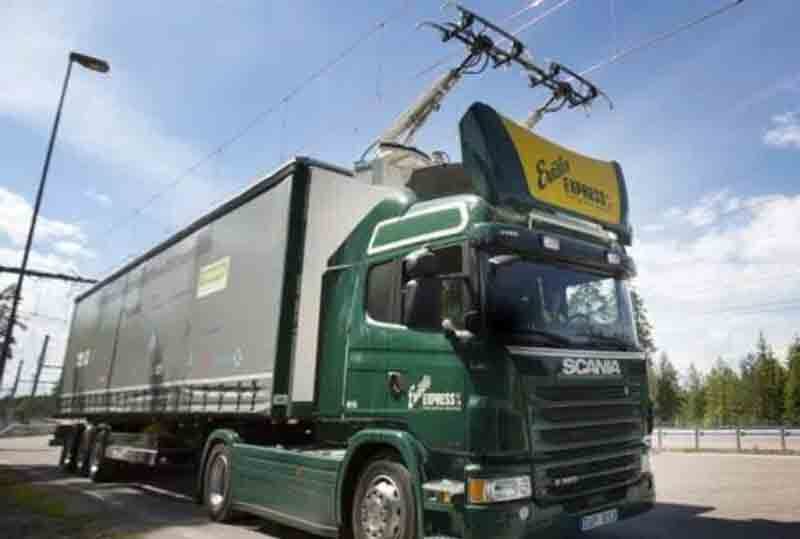 Since this week Germany has a section of “electrified highway”: 10 km from the autobahn as it passes through the federal state of Hessia in which an electric power line has been installed, a catenary system similar to that used by trains to obtain electricity. But in this case, the system provides electric power to hybrid trucks.

Hybrid trucks have two propulsion systems: a conventional diesel engine and an electric motor. Unlike other hybrid vehicles, the combustion engine does not supply electricity to the electric motor. In contrast, hybrid trucks developed by Scania have a pantograph installed on the roof that rises to make contact with the catenary from which it obtains electricity. The same connection through the pantograph serves to return to the electricity grid the excess electricity, for example, that occurs when the truck brakes or when using the motor brake.

The system is not very different from that used by trolleybuses years ago.

To change the mode of operation of the truck, switch from diesel engine to electric motor, the driver does not have to do much: the “intelligent” pantograph is automatically activated when it reaches an electrified road, as long as the vehicle circulates to 90 km / h maximum, and disconnects and folds again when the truck is about to leave that section, and the diesel engine begins to operate. Although the system is not very different from that used by trolleybuses many years ago unlike those hybrid trucks can circulate outside the power lines in a conventional way using the diesel engine.

Siemens began developing the highway system in 2012, first on a 1.5 kilometer “private” expressway section on which it carried out thousands of kilometers of testing. Since last year the tests are already being carried out on public roads, with real traffic. Before this stretch of motorway opened a few days ago in Germany since last summer in Sweden already works the same system in a stretch of 2 kilometers of the E16 motorway. Sweden has partially funded the project to evaluate solutions that will help it achieve its goal: to dispense with fossil fuels in the transport sector by 2030.

Advantages and disadvantages of electrified highways

One of the advantages of the highway system is that it can be installed on conventional roads without being an obstacle for other vehicles, not even for other trucks. So the rest of vehicles and trucks “not electrified” can continue to use all lanes normally. According to Siemens, no major changes in the current regulations are necessary either.

However, its installation requires clear sections vertically, while establishing a height limitation on electrified tracks. Its cost, which is around 2 million euros per kilometer, also limits which sections are likely to be electrified. For the time being, the first sections of electrification would be driven by heavy goods trucks without the option of rail transport.

To make use of the highways the trucks must be adapted and have electric propulsion and pantograph. The electric power supplied by the system is capable of moving trucks of 40 and 60 tons with twice the efficiency of conventional trucks; More than 80% efficiency (the ratio between the energy consumed and the energy used), according to Siemens. This translates into a significant reduction in fuel consumption and local CO 2 emissions: up to 6 million tonnes of CO 2 less per year if 30 percent of freight trucks on German highways are electrified.

The city of Hamburg and also the Swiss St. Moritz has a system similar to highways but adapted to the urban transport of people. The system, also developed by Siemens, supplies electricity to line buses during stops, with the difference that in this case the pantograph is not installed on the electric bus (or “us”) but at the stop. Thus, while the “us” waits for the passengers to raise and lower the pantograph, the pantograph descends and supplies electricity that is stored in the vehicle’s batteries.

Although recharging is only carried out for a few minutes, the electricity supplied, with a power of 450 kW, is enough for the “bus” to reach the next stop. In comparison, the quick charging plugs for electric cars provide between 10 and 20 kW.

With this system at present, the line 109 of the city of Hamburg travels 7 kilometers using only electric energy, without particulate emissions or local pollutant gases and without adding noise pollution to the urban environment.