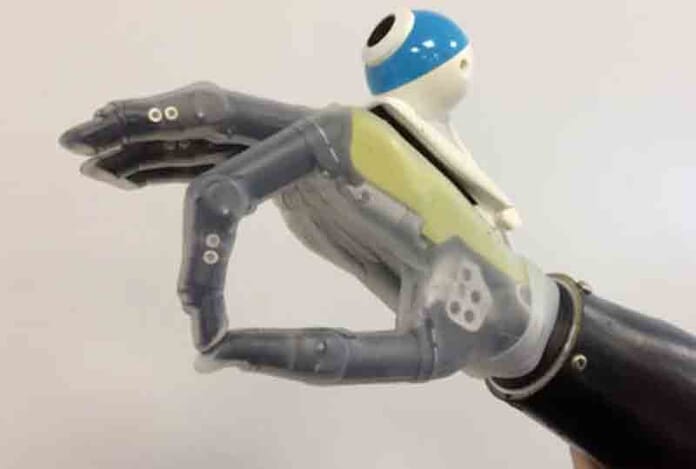 Is it possible to create a prosthetic arm that works just as naturally as a normal arm? That dream is now a little closer, thanks to this innovative model created by biomedical engineers Newcastle University, UK. It is a bionic hand equipped with an artificial eye and allows the user to grasp any object almost automatically.

The eye is a camera connected to an artificial intelligence program, which takes snapshots of the object to be grasped, and processes all the information related to its shape and size, and the distance to which it is located. Based on these data, the system decides the best way to get the object and sends the relevant order to the hand. And best of all, the process takes only a few milliseconds, which makes this prosthetic limb ten times faster than any other already existing.

But, for the system to make that decision, the creators of this bionic hand have designed four basic modes of grip: one placing the palm of one hand as if it was going to take a cup; Another with the palm facing upwards, as when holding the remote control of the television; The third forming a sort of tripod with the thumb and two fingers; And the last one with the thumb and the index placed in position of pincer.

The purpose is for the system to use these four models as a reference to compare them with the shape and size of objects to be grasped.

At the moment, this bionic hand has been tested by two volunteers who had suffered the amputation of one of their arms, and the results have been truly spectacular since they felt that they could pick up any object in an almost instinctive way.

Now, the dream of its creators is to perfect this prototype and start working on another even more ambitious. They aspire to create a model in which the prosthesis electrodes merge with the nerve endings of the arm such that the brain and artificial limb have direct communication.